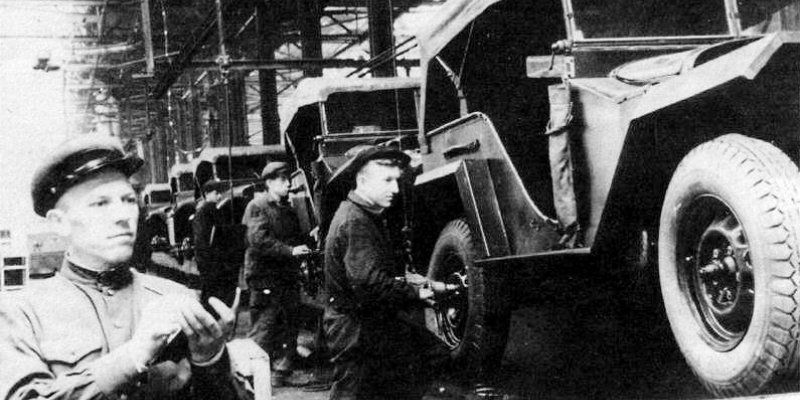 GAZ-64 (full factory designation GAZ-64-416) was designed in a very short period of time & ndash; started designing on February 3, 1941, and on March 25, 1941, the first test car took place, and on June 26, 1941, not waiting for the completion of all tests, a decision was made on serial production. In late August 1941, the serial production of these machines was organized. The design used serial units and units GAZ-MM and GAZ-M1.

The GAZ-67 is a deeply modernized GAZ-64 - the track was extended, the frame and suspension were strengthened, the more advanced K23B carburetor was used (which gave an increase in power by 4 hp), the form of the wings was expanded, side steps appeared, the front the bumper is 40 mm forward, a wooden 4-spoke steering wheel with a diameter of 385 mm is forced instead of 3-spoke carbolite from GAZ-M1 (the plant where the steering wheels were made was destroyed as a result of the bombings), the driver and the passenger were installed with a pneumatic drive ( n GAZ-64 only to the driver) in the rear part of the awning box has (have GAZ-64 it was not) and so on.

In GAZ-67B, as compared with GAZ-67, more advanced wheel hub bearings are used, sealing of the front propeller shaft splines is improved, mounting strength of the front springs is increased, wheel rims are enhanced, the angle of the pivot wheels of the front swivel wheels is reduced (castor) and an interrupter is used P15 distributor.

GAZ-67 and GAZ-67B did not differ in appearance in any way. But the car is constantly being upgraded. In 1948, the appearance of the car was most noticeably changed - the welded composing grille was replaced by a stamped one with seven vertical slots. At the same time, the K22 carburetor, the fuel sump filter, the P30 interrupter were applied, the main gears were improved, and the steering wheel with a wooden rim was replaced with a plastic 3-spoke with a diameter of 425 mm. In the third quarter of 1951, double-acting shock absorbers (type GAZ-11) were introduced. In 1952, there was another characteristic change in the exterior of the car - triangular projections disappeared from the top of the hood - houses. This, the so-called produkh to cool the engine, gave way to the gills on the sides of the engine compartment.

According to the 1948 manual

According to the catalogs of spare parts and reference books 1952 & ndash; 1959's

Power reserve with full load on the highway

8 valves, lower one-way arrangement, on the right side of the cylinder block

To the front axle

To the rear axle

40 liters under the rear seat

30 liters under the driver's seat

gasoline with an octane rating of at least 57

Normal pressure in the lubrication system

Run to overhaul for a new car

Run to overhaul for a car that has been overhauled

Technical characteristics of Soviet and imported cars. Military publishing house of the Ministry of the Armed Forces of the USSR. 1946.

GAZ-67 car. Quick Start Guide. Military publishing house of the Ministry of the Armed Forces of the USSR. 1948. 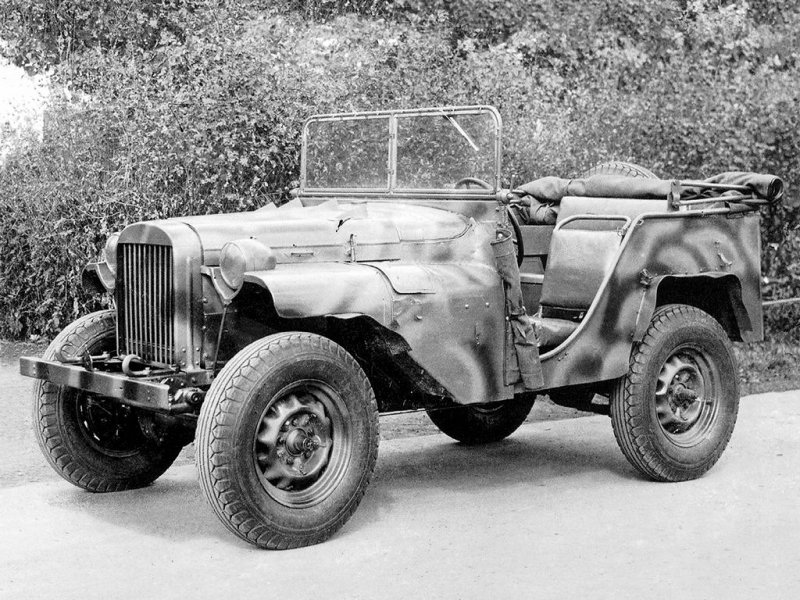 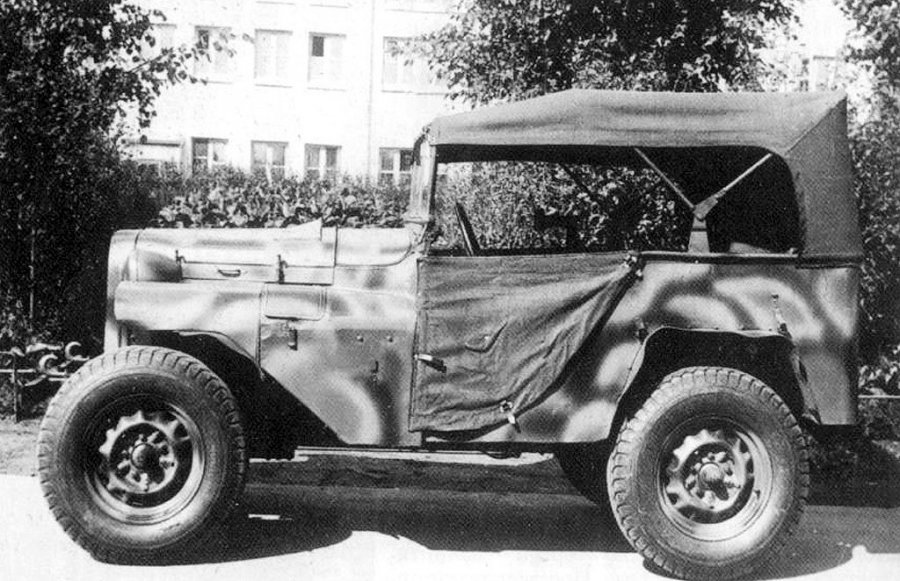 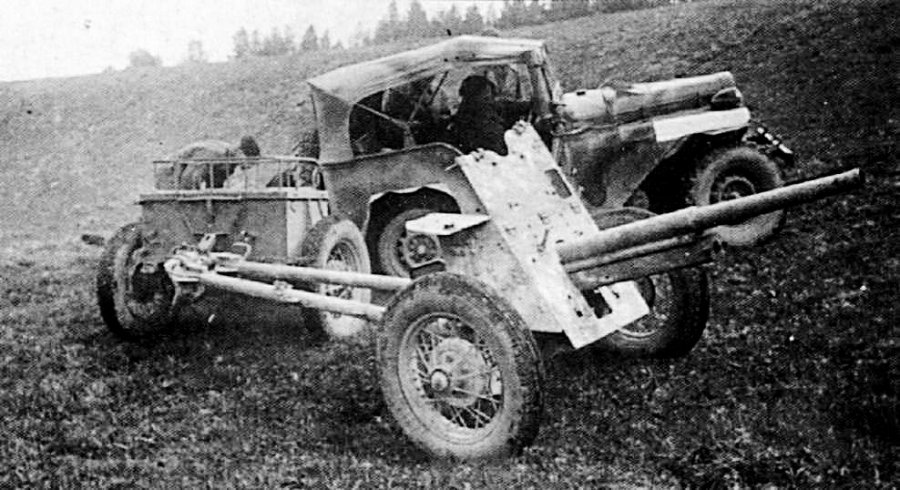 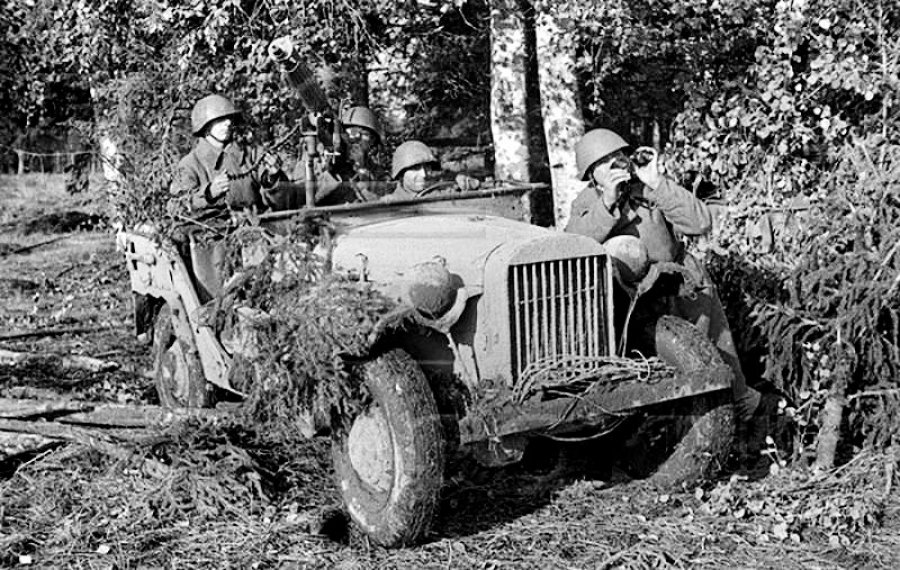 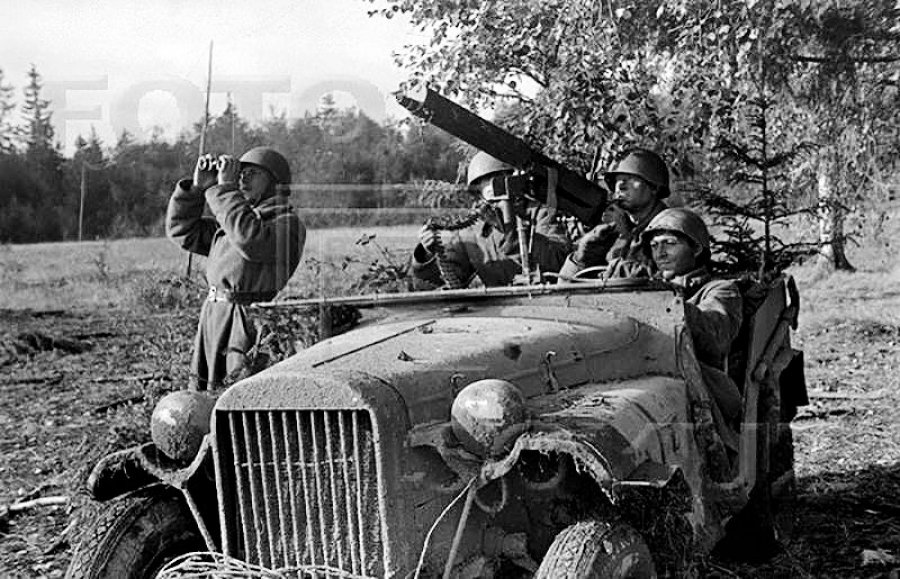 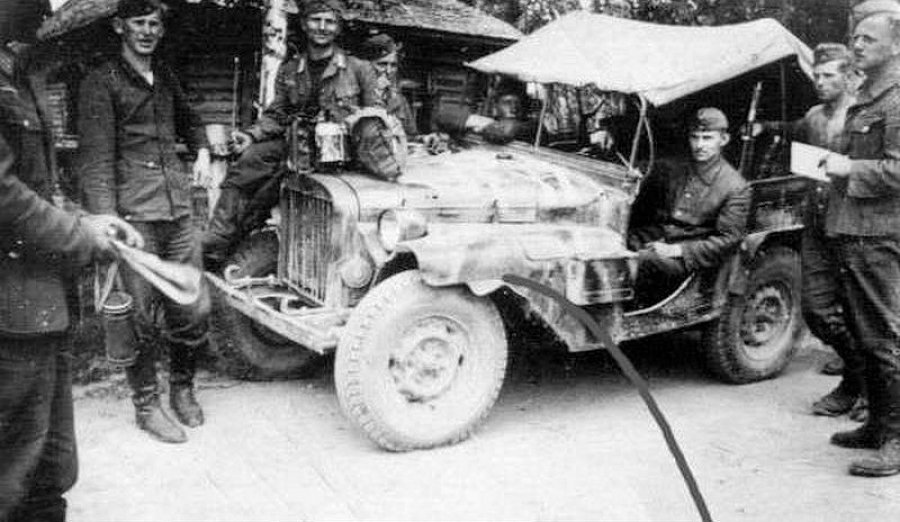 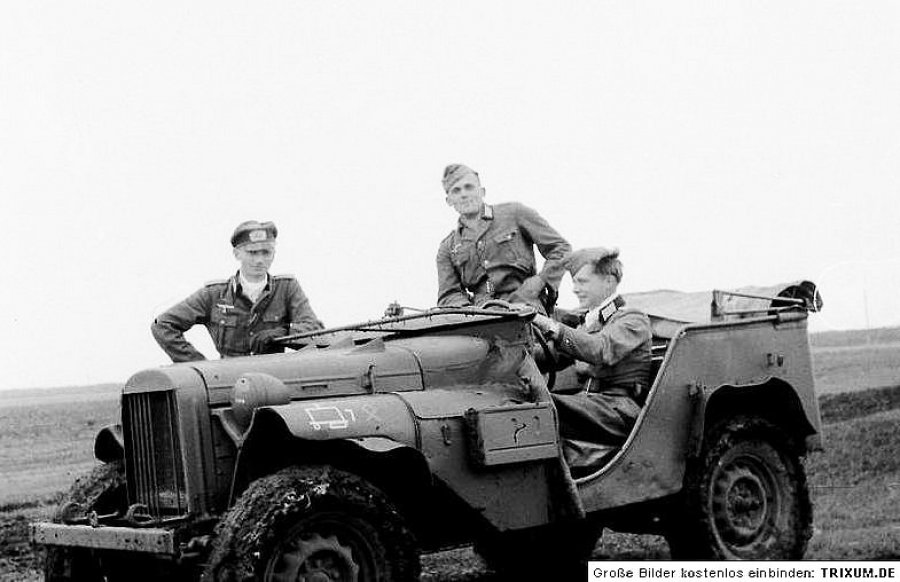 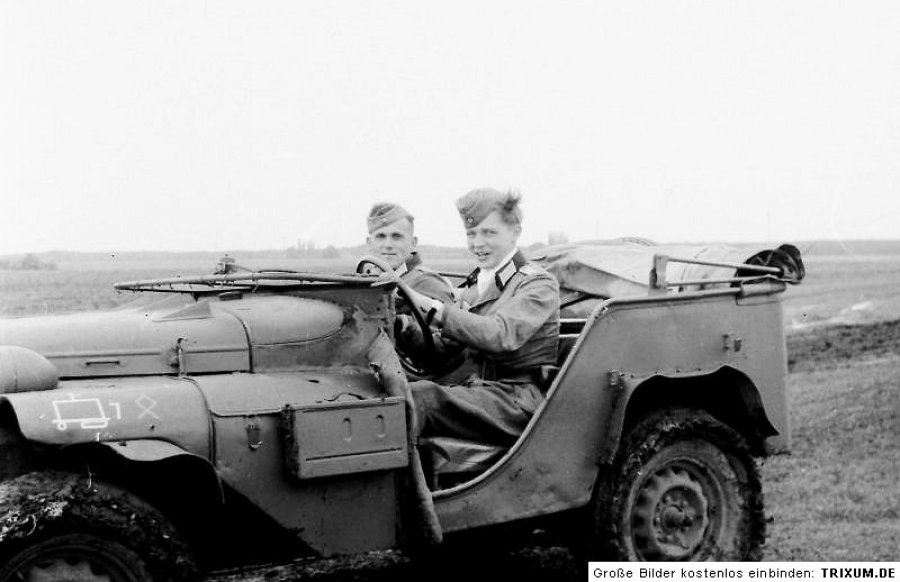 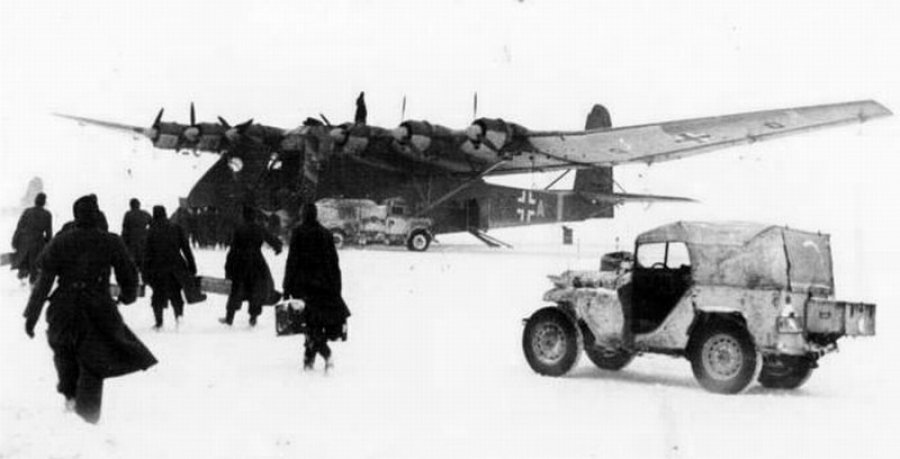 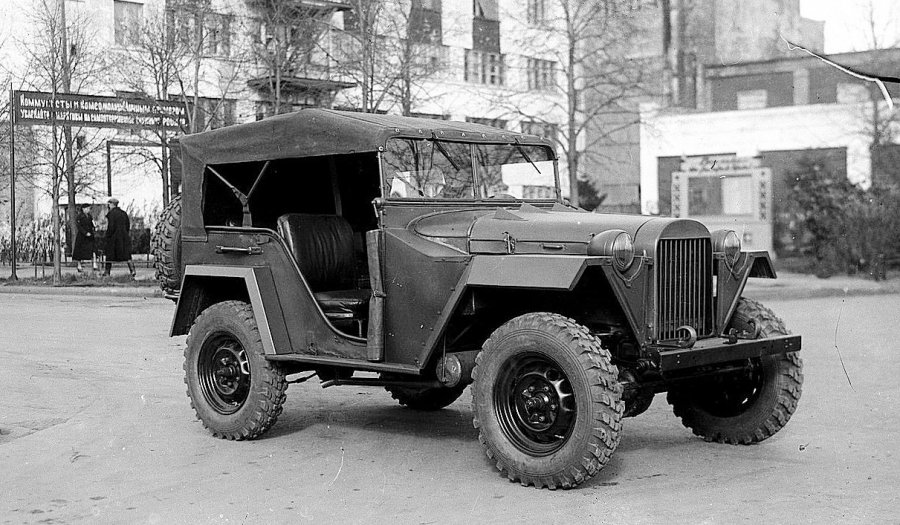 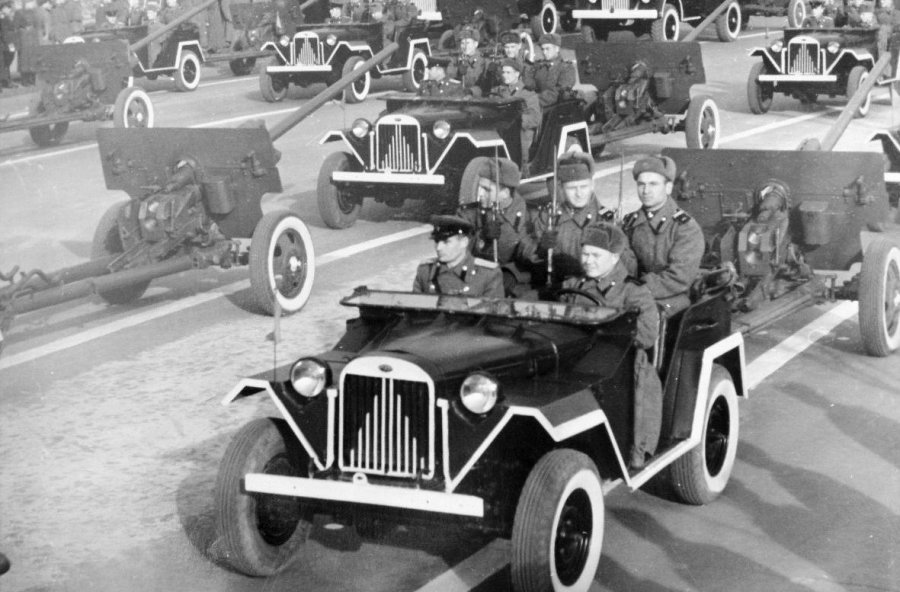 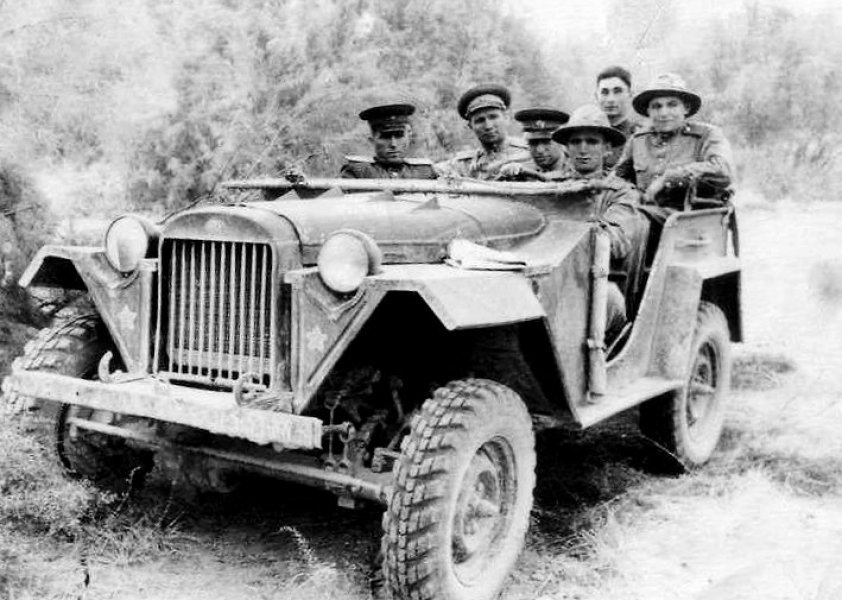 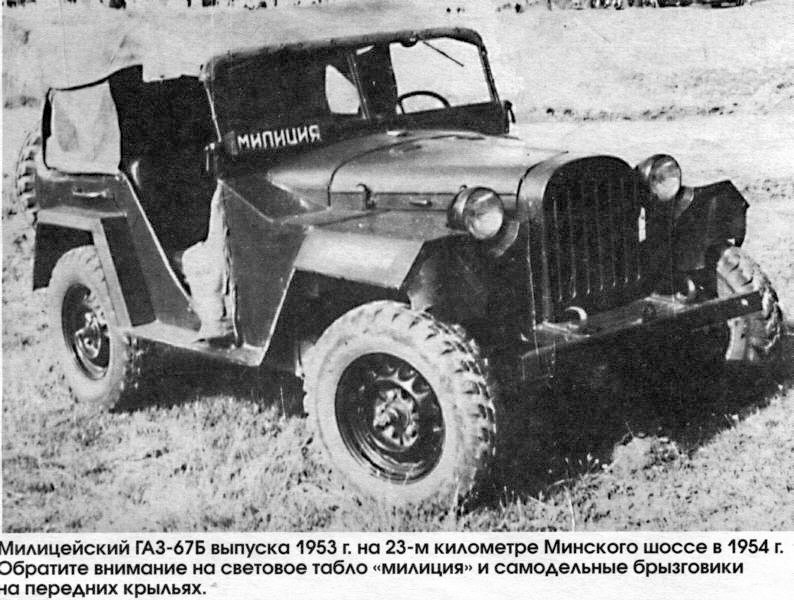 More photos of these machines can be found at the following links:

If you notice any errors or inaccuracies in this article, please inform us at retrodetal@gmail.com with a letter marked GAZ-67

Workshop for repair of vintage cars in the town of Dmitrov, Moscow region