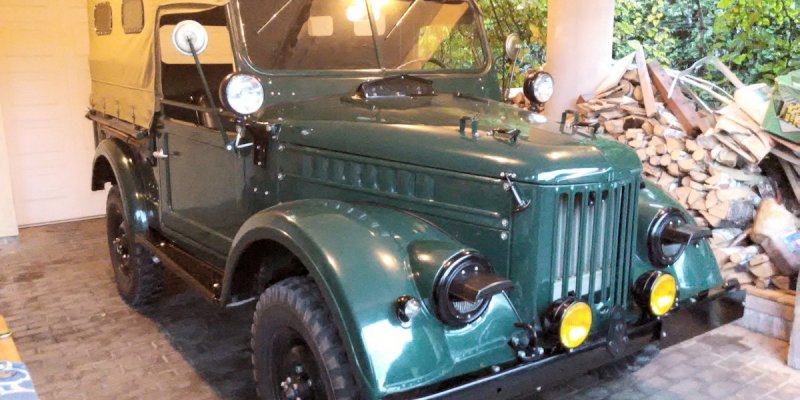 From 2000 to 2014 I had a black Russian terrier (black) ROKAS. It was more than a dog, more than a friend, more than a son (I have two daughters, my wife has two sons - for two we have 5 grandchildren and 4 granddaughters - only 9 !!!). ROKAS was very fond of nature and travel. Not one thousand kilometers we traveled.

This car is in my memory of ROKAS. Other retro cars were not and will not be, as there will be no other such dog as ROKAS.

On November 4, 2014, this GAZ-69 appeared in my yard. For many years he stood as a "sign" at one of the forest motels in Lithuania. Once it was a radio machine, but there was only a sign and a body with openings for radio equipment and the reckless actions of former masters. And the rest - a team of solyanka from all once produced cars in the USSR. The body was rotten.
In the winter of 2014 - 2015, I dismantled the car to the last nut and bolt. In March 2015, everything that could endure a sandblast, went to this procedure. I began to sort out what is, what else is fit, what to look for and where to look. I made the original list (by the way, in the future, the more I did, the longer this list became). Peel Valerian with Validol.
For half a year my familiar sandblasters, body painters and painters did their work, I "scrubbed" the small change, collected parts that were missing. Thank God, the documents are in order, the body numbers and engine numbers are the same as the documents. Yes, and the frame, it seems, "native". Judging by the date on the wheel disks, on the picture inside the mirror in the cabin and marking some of the nodes, my GAZ-69 was born in November 1962.
Around September 2015, everything green and black returned to my garage (the garage for three cars was completely clogged with parts from the GAZ-69, laid out on the floor!). What is subject to galvanizing was done for several "calls", as the cover of the details was clarified "step by step". In Vilnius.
I "scrub", "assemble" and complete. So passed the autumn, winter and spring of 2016.
In March of 2016, I put the frame on the "goats", the gearbox and the transfer box on the table, bridges for big "goats", and the engine was already hung. To the roof neoshala, went from one to another (to ventilate the brains and unintelligible on the mistakes). By the new year of 2017, everything has acquired its commodity-working form.
He buried his father. Mom has not been 10 years.
In February 2017 he began to collect. The first operation to assemble the car - it was fixing the fuel sump filter - to the frame.
On August 31, 2017, we with GAZ-69 passed the certification for "historical". I wait for documents (should come about in the middle of October).
Yes, sandblasters, body builders, painters helped. To help was the physical strength of neighbors - to transfer gravity or when a "third" hand is needed. He made many small things himself-for example, the bracket for the shovel on board, the starter's draft, the oil filter, the license plate brackets (by the way, the oil tank was fastened due to the oversized out of the rear number), the expansion of brake and fuel pipelines, and much more.
Vice, angle grinder, "benders", hammer, acid, I have welding, and both hands are not left.
he photo shows that the preheater is not connected. I can not find the supply and discharge pipes of the boiler - part number 69-1015078 and 69-1015080. I will be grateful for help if anyone has these details.